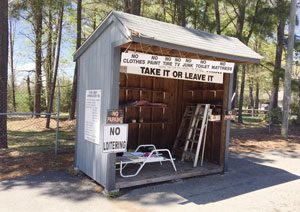 Back in 2012, Sandy Henbest had an idea: Let’s build a structure at a Northumberland County trash/recycling transfer station where people can leave items that are too good to throw away, and others can pick them up and make use of them rather than serviceable items going into the landfill. With an OK from the county, funding from NAPS, help from some area businesses and a lot of elbow grease from NAPS members, by early August 2012 the shed was in operation.
Nearly six years later, the Too-Good-to-Throw-Away-Shed at the Horsehead transfer site is still serving its function – supporting recycling, lessening the rapid filling of landfills, and providing a means for people to acquire items they need… Read more…
Visit napsva.org for more information on Northumberland Association for Progressive Stewardship – join NAPS today!