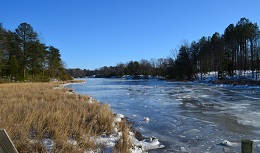 Latest report from the Chesapeake Bay Foundation: Underwater grasses expanded 21 percent. The blue crab population jumped 35 percent. The Bay’s native oyster population, a critical species that naturally filters the Bay’s water, is rebounding. For the past two years, reports Pamela D’Angelo on the Free Lance-Star, there have been no documented occurrences of “anoxia” in the Bay or its tributaries—that is, water completely devoid of oxygen, due to pollution—a first since scientists began tracking this metric in 1985! Read more in the 2016 Year in Review Report by the Chesapeake Bay Foundation.